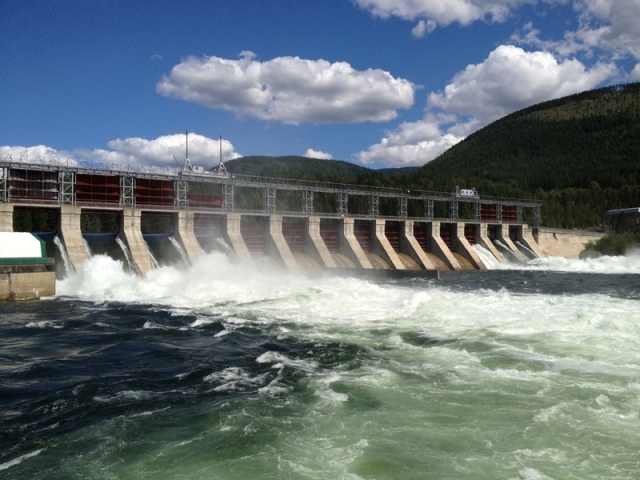 The Beasley Fire Department was called out to extinguish the fire, which occurred in Generator #2 at approximately 10:30 a.m.

“We experienced a fault in one of our generators at the Corra Linn Dam,” Fortis BC spokesperson Michael Allison told The Nelson Daily Monday.

“The fire suppression system was activated and Beasley Fire Department was called to put out the fire,” Allison added.

“We’re currently investigating fire to determine what exactly caused it.”

Two of those generators — including Generator #2 — were recently overhauled as part of a capital project that brought all the hardware of each unit up to today's standards.

Allison could not specify how much damage the unit experienced, saying the fire was small in size and quickly extinguished.

“We are assessing the damage right now,” said Allison, adding FortisBC staff conducted a complete environmental assessment of the to make sure no toxic contaminants leaked into Kootenay River as a result of the fire.

“It was a relatively small fire and it was put out fairly quickly by the (Beasley) Fire Department. So part of our investigation is to determine how much damage and the cause was but thankfully we did not experience any loss of electricity service to our customers.”

FortisBC is presently involved in a labour dispute with IBEW Local 213 workers.

FortisBC locked out unionized workers June 26 when a work slowdown by IBEW Local 213 membership jeopardized the company’s ability to supply customers with a reliable electric service.

When asked if the labour dispute had anything to do with the fire, Allison said, “absolutely not.”

“We monitor our generation facilities 24 hours a day and 365 days a year so we don’t compromise safety and we do have managers who are trained should anything happen,” Allison said.

“We’re committed to ensuring the highest level of safety and maintaining all of our equipment in the safest possible manner and all the current regulations.”

The labour dispute between FortisBC and IBEW Local 213 is about to enter its third week.

No new talks have been scheduled.

Although FortisBC spokesperson Joyce Wagenaar said in an email, “FortisBC remains available to go back to the bargaining table.”

IBEW also represents employees on the gas side of FortisBC in a different collective agreement. The gas employees will not be impacted by this job action.

FortisBC and IBEW Local 213 have been without a contract since January 31, 2013.

Prior to the lockout there was ongoing negotiations since early January with no movement on a key issue of changing job classification language the company has proposed and wages.