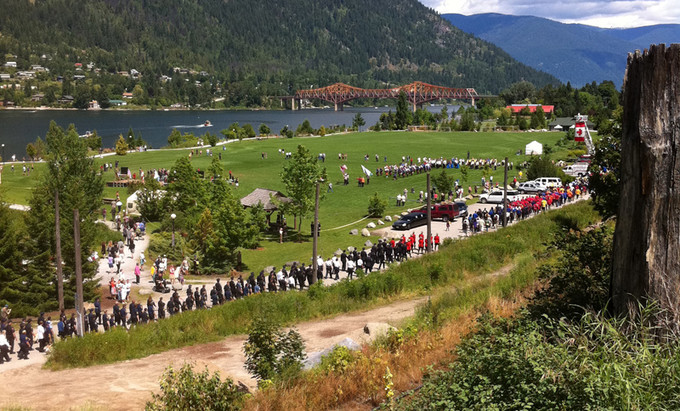 SAR Family Members Flock to Nelson to Honour Sheilah Sweatman
Nelson Daily - Rescue members from Golden to Grand Forks and Smithers to Seattle, Wash., flocked to Nelson Saturday to pay tribute during a memorial service for Ymir resident Sheliah Sweatman.
Sweatman, a member with the Nelson Search and Rescue, died in late June after being swept down the Goat River near Creston while members of a swift water rescue team attended the scene of a submerged vehicle.

“I just want to be part of the ceremony . . . I want to pay my respect,” Shawna Lovell said prior to Saturday’s march as the Salmo Fire and Rescuer joined more than a 1,000 SARS, police and fire department members to show support for Sweatman.

“We have search and rescue members from all over B.C. and Alberta . . .. I saw people from King County in Seattle, Spokane Search and Rescue.”

The march, led by police motorcycles, the Nelson SARS team and the Kootenay Kilties Pipe Band, paraded marchers along the Nelson waterfront to a stage errected at west end of the Lakeside Soccer Pitch.

During the ceremony dignitaries and members of the Sweatman family paid tribute to the 29-year-old member of Nelson Search and Rescue who died trying to make a difference.

Craft had worked with Sweatman as part of the Kootenay Swift Water Team.

“You never know just how many people are going to show up for an event like this,” he added.

“(Nelson) is kind of in a remote place in the province. But there are a lot of dedicated search and rescue emergency service people out here and it shows by the number of people here today.”

On the afternoon of June 29, Creston RCMP were called to the Goat River, just off Highway 21, south of Creston following a report of a vehicle leaving the road and submerged in the river.

Search and rescue team resources required to carry out an examination of the vehicle mustered at the location, with an objective of determining if there were any occupants in the submerged vehicle.

At about 4:15 pm during the course of their search efforts, utilizing swift water line equipment and a swift watercraft, Sweatman went overboard into the river and did not surface.

Efforts to locate and rescue her were not successful.

The death of Sheilah Sweatman marks the first time in B.C. SAR history that one of the province’s volunteers was killed while in service.

Investigations continue to determine the cause the accident.

“It will be months, maybe even a year, before we know what happened,” Craft confessed.

“(But) you can always learn something from every mishap, good or bad,” Craft added. “Some of us have already changed some of the little things we do. But generally things were done really well . . ..”

No matter when the police or coroner reports are released, they will not remove the sting and grief members of the Nelson Search and Rescue are experiencing.

“It’s going to take our group a long time to heal from this,” said Springman.

—with files from Tim Schafer, The Nelson Daily