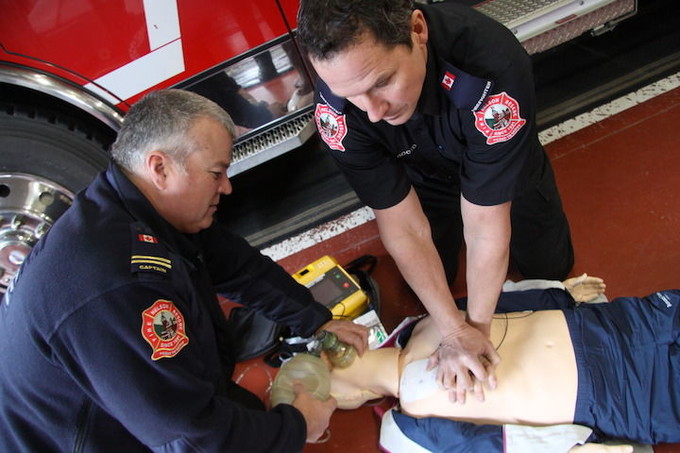 Nelson Fire Department adds new defibrillators
Greg Schlosser knows firsthand the utility of an automatic defibrillator. On October 2 last year, the popular catering manager at the Hume Hotel was setting up for a banquet when he collapsed in cardiac arrest.

Two things saved him: Galen Boulanger, a Grade 12 L.V. Rogers student with training in CPR, immediately started chest compressions on him. And minutes later, firefighters arrived with a defibrillator and shocked him twice.“If it wasn’t for them I wouldn’t be alive today,” he says. “The doctor thought the oxygen was gone out of my brain and I might not recover.”Though he doesn’t remember it very clearly, Scholsser was taken by ambulance to hospital in Trail, and then medevaced to Kelowna for surgery, where he spent the next two weeks.Afterward, he went to Royal Jubilee Hospital in Victoria to be implanted with a cardioverter-defibrillator. “In case my heart rate goes down, it will shock me, but I don’t think I need it,” he says.Schlosser’s case wasn’t unusual.Sudden cardiac arrest is one the most common causes of death in Canada, and it’s well established that early defibrillation is important, with the chance of survival decreasing by ten per cent with each minute of delay.Automatic external defibrillators improve survival rates, especially when combined with CPR. Nelson’s firefighters are often called to life-threatening medical emergencies, but until recently only had one defibrillator, which they kept at the hall and tossed in the responding vehicle.The department recently added two more of the computerized devices, valued at about $2,500 each. They’re now able to keep one in each of three rescue vehicles that can be out at any given time, potentially meaning quicker responses.Chief Len MacCharles says all firefighters know how to use the equipment, and two of their members also teach other city staff. While using a defibrillator was once a specialized skill, the current automated models are designed so that with some instruction, almost anyone can do it.He encourages people to take CPR and defibrillator training as more of the devices are installed in public buildings and workplaces. In addition to the fire department’s three machines and others with the BC Ambulance Service, they are also found at the Nelson and District Community Complex, the Civic Centre, and Real Canadian Wholesale Club. The Nelson Police Department and Nelson Hydro also have them for their own use.“Few things are as rewarding as meeting up with those who were on the brink of death and their families days after a successful defibrillation,” MacCharles says. “You can see the appreciation on their faces – and sometimes even in the cookies they bake.”That’s how Schlosser thanked the fire hall. “It was the least I could do,” he says. “I’m thankful for the young man who saved my life and to the fire department.”Schlosser is now home and “doing really well,” appreciative of the hundreds of well-wishes and “phenomenal” community support he’s received. He’s hoping to return to work in mid-February, although he can’t lift too much yet, and won’t be able to perform the same duties as before.As for the defibrillator itself, he says “it might be only used once, or never, but as long as it’s in reach of someone who knows what they’re doing, it can save a life.”