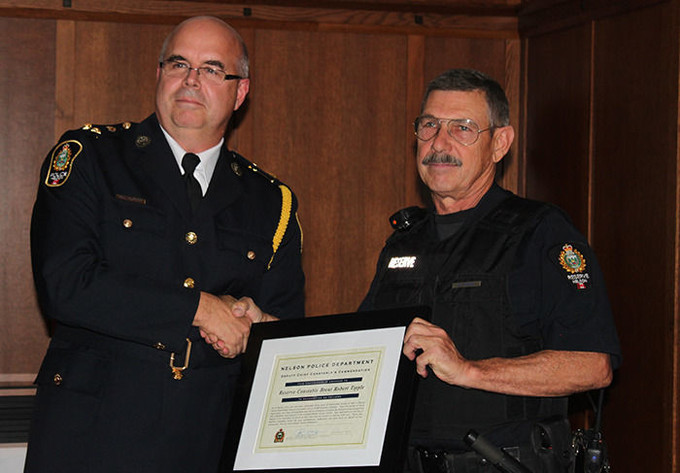 Police Commendation for our Captain Brent Tipple
We're so proud of our Captain Tipple, who has received a commendation from the Nelson Police Department. In the words of Deputy Chief Constable Paul Burkart:

Where does one start with someone like Reserve Constable Brent Tipple?  The role of Reserve Officer is that of a trained volunteer who works under the direct supervision of a police officer.  Reserve Officers receive 120 hours of training which is much the same as what regular police officers receive in their initial instruction phase of the police academy.  Each reserve officer goes on to commit at least 120 hours a year to activities including patrol duties with regular members, park patrol, traffic control, prisoner guarding, and assisting with Nelson Police Camp.

But if you are Brent Tipple, you do a lot more than that.

If you are Brent Tipple: You are the coordinator of Crimestoppers for the West Kootenays.

You are the coordinator of, salvager, head mechanic and operator of the Daynard - the Nelson Police Department zodiac. You support the Nelson Airport Air Show and the Roadking Car Show by doing traffic control.

You hold the point at the Courthouse bomb threat.

You run the Speed Board for the ICBC Speed Watch program.

And you run the police boat for the city water testers each year - after all, you worked for the Ministry of Transport for 40 years as a Hydrometer Surveyor Technologist.

And who do we send to Castlegar to escort Kyle Friesen (lawyer and one of two legal advisors for the RCMP in BC, and a guest speaker for our department)?  The one and only Brent Tipple.

And how do we contact Brent to do all of this for us?  We call him on the police radio, of course, because Reserve Constable Tipple is "always on the air".  When we purchased our new radio system, I took into account the fact that Reserve Constable Tipple has had an NPD radio on at home or with him in his vehicle since he became a member of our reserve squad five years ago.  And as I was driving up the highway to test the quality and range of the new radios, who do you think was the first one answering my broadcasts?   Brent.But as someone who eats, breathes, and dreams service to his community, a position with Nelson Police would certainly not be enough.Brent has been a recovery diver with the Ottawa Police, the Fire Chief of the Ymir Fire Department, a member of Nelson Search and Rescue, and a volunteer ski patrol member at Whitewater.  He is currently a navigator with the Civil Air Search and Rescue Association and a Captain with the Beasley Fire department under the tutelage of Fire Chief Al Craft.        And if all that were not impressive enough, before joining our reserve program five years ago, Brent served as an auxiliary police officer with the RCMP for 25 years.  Next year, Brent, in his final year of police service (after all, he will be turning 70!) will have completed his 30th year as a reserve/auxiliary police officer.For his duty to his community, but specifically for his commitment to the Nelson Police Department, I would like to present Reserve Constable Brent Robert Tipple with this - a Deputy Chief Constable's Commendation - that reads as follows:

As of March, 2015, you will have completed 30 years of impeccable service as both a Nelson Police Department Reserve Constable and an RCMP Auxiliary member. Over the period of those many years, you have distinguished yourself on numerous occasions by demonstrating exceptional skill, judgment, and integrity in the accomplishment of your duties. Your dedication to the City of Nelson is an inspiration to all of us who have had the honour of serving with you. Thank you, Reserve Constable Tipple, for your perseverance, dedication and hard work on behalf of our community. You, Sir, have indeed "made a difference".