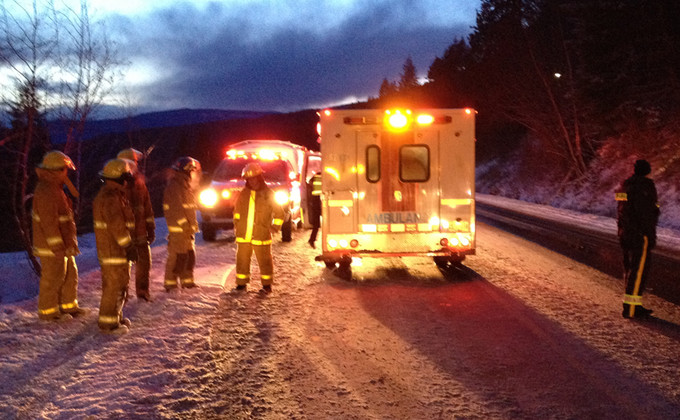 No serious injuries reported in two-car Bonnington accident
The Nelson Daily - Slippery roads are the blame for at least two accidents Tuesday afternoon on Highway 3A west of Nelson.
At approximately 4:20 p.m., a late model Honda collided with a Ford F150 near the Bonnington/South Slocan border.

Both single-occupant vehicles ended up in the ditch with the women driving the Honda taken by ambulance for precautionary assessment.

The accident slowed commuter traffic heading from Nelson to a stand still and almost resulted in another accident in the lineup of cars heading westbound.

A male driver of an older Ford pick-up came around the corner too fast and slid into the stopped traffic, narrowly missing a parked car by inches before putting the passenger side front wheel into the ditch.

The driver was able to manouver the truck out of the ditch when traffic was allowed through the accident scene.

RCMP, members of the Beasley Fire Department and B.C. Ambulance attended the accident.

A few kilometers east of the accident, near Beasley, a late model pick up with a canopy slid into the ditch, also causing minor delays to traffic.

No one was hurt.