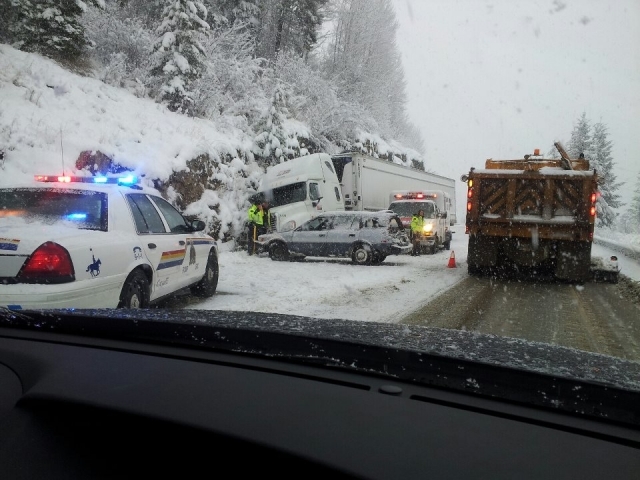 At approximately 11:53 a.m. Monday, Nelson RCMP received a call from BC Ambulance Service reporting that they had received a telephone call from a motorist that there was a semi truck in the ditch on Highway 3A.

It appears the semi-truck with attached trailer rounded a blind corner heading west bound on the highway only to see a car blocking the westbound lane.

"The car had been traveling west bound on Highway 3A and 6, with the car having gone off road right colliding with the rock face causing the car to re-enter onto the highway and coming to a stop, blocking the west bound lane," said Constable Paul Gauthier of the Nelson RCMP.

"The semi-truck driver reacted, having steered the semi-truck off road right and avoided making contact with the car and averted a serious collision."

RCMP said the lone adult female driver of the car was transported to the Kootenay Lake Hospital by BC Ambulance Service with minor injuries.

The semi truck driver did not sustain any injuries.

The road was closed down for some time and tied up commuter traffic while crews worked to remove the semi trailer and car from the highway.

Road conditions at the time of the collisions were snow/slush covered, typical of winter driving conditions associated to heavy snowfall.

RCMP would like to remind motorists to adjust their driving speeds for winter road conditions and to ensure the use of adequate winter rated tires and or chains.