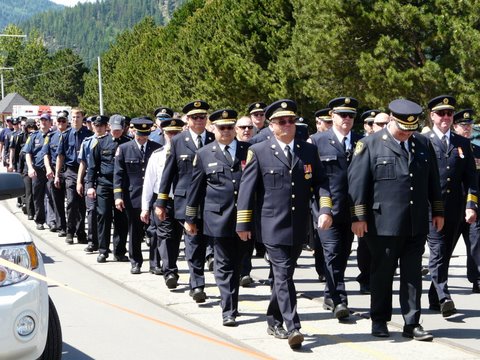 Sweatman's spirit honoured
Nelson Star - Search and rescue workers from around BC, along with the RCMP, BC ambulance paramedics, firefighters and other emergency responders gathered with family and members of the public to pay respect to Sheilah Sweatman on Saturday.

The sound of bagpipes led the way as a procession of approximately 500 uniformed emergency service workers made their way down Lakeside Drive.

Crowe said Sweatman’s death is a personal and painful reminder of “the price of our service.”

“Having your SAR pager go off is as likely as responding to your family, but it is a rewarding job,” he said.

Fear said Sweatman was happiest on the front line and her attitude was an inspiration.

“Sheilah was the strongest woman I’ve ever known. She gave the best bear hugs, had a mischevious smile, and big brown eyes that could convey anything,” said Chatten.

Michael’s eulogy wove together metaphors and lyrics by musicians like Bob Dylan and Lynard Skynyrd.

“Our root and our morning star, where there is darkness let there be light, for once you’re gone you can never come back. But we will meet again, and we will be together forever. Gone and not forgotten, now but not forever,” he said.

Framed by two paintings by Sheilah, her parents painted a portrait of their daughter.

“As you know, Sheilah was an artist. We’d like to paint a picture for you,” said Teddi.

“Sheilah was always a work in progress, emerging and evolving from one beautiful stage and moving on to the next,” said Wynn. “Sheilah took the chair lift to the top of the ski run, and from there, where most skiers and boarders look for a good trail down maybe a safe trail, Sheilah looked up, at how much more mountain there was available. The top of the chair lift was the beginning of her climb and not the run down.”

Her parents shared Sheilah’s passion, sense of adventure and creativity.

They spoke of how close she was to her family, calling her parents every day, and texting her mom to say good night.

Sheilah, 29, who was originally from Manitoba, died in the line of duty at the end of June. She drowned while on a mission to recover a car from the Goat River.