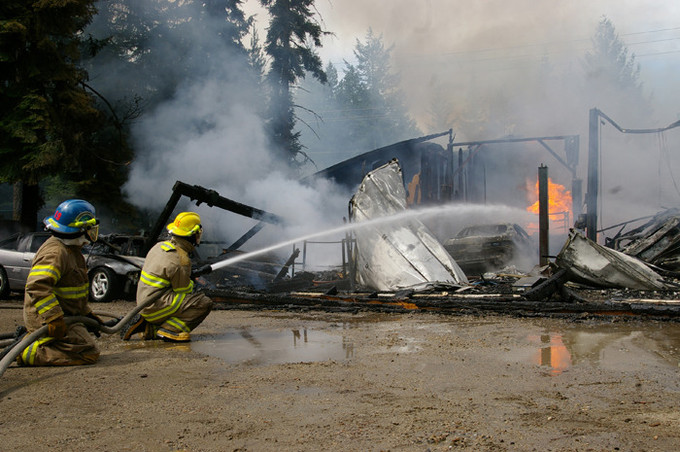 The owner of the Crescent Valley shop, Chris Carlson, said he was under a car cutting through an exhaust system when the blade of his saw hit the gas tank. A moment later there was a wall of flame next to him.

"The safety vest I was wearing caught fire, so the first thing I was thinking was to get that off," said Carlson.

His co-worker tried to move some of the vehicles away from the flame while Carlson emptied the shop's fire extinguishers on the burning vehicle.

But they quickly realized the fire was beyond their ability to deal with. Carlson called 911 around 10 a.m.

Carlson has been a volunteer with the Crescent Valley fire department for 10 years, so he also helped knock down the flames.

"I've been to the scene of many fires, so I know this kind of thing happens," Carlson said, standing on the back of a fire truck. "I guess maybe it hasn't hit me how bad it is."

He has minor burns on his neck. The fire destroyed his shop, as well as eight vehicles, including his family collection of six classic cars. He estimates it's about $200,000 in damage.