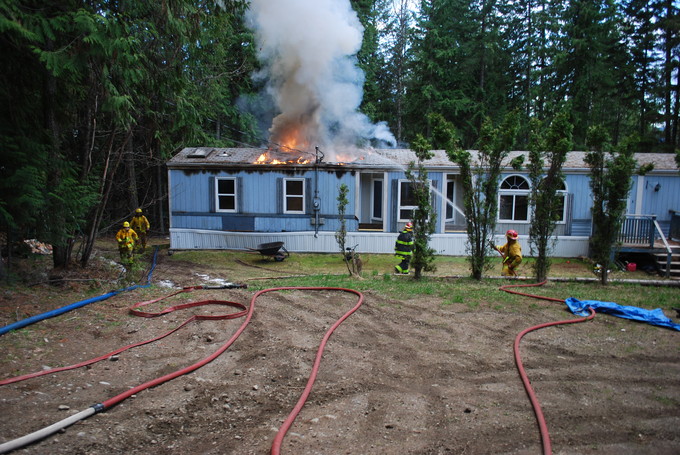 Bonnington trailer fire reveals grow-op
Nelson Star - A trailer that burned in Bonnington on Tuesday night was the site of a grow-op, RCMP confirm. No one was home when the fire broke out on Whitelock Road.

Beasley fire chief Al Craft says his volunteers were at their regular weekly practice when the call came in.

“Most of our members were there, so that made a great training practice,” he says.

Because they were initially unsure about their water supply, they brought in back-up from neighbouring departments in Blewett and Crescent Valley.

“When we got on scene, the fire was through the roof of the trailer in the laundry room area and spreading slowly,” Craft says. “We connected with a hydrant right away. We had the fire knocked down pretty quick, but it took a while to get it out.”

The trailer was heavily damaged and probably a write-off, he adds.

Firefighters weren’t too concerned about the fire spreading to other outbuildings, as things were cool and damp.

RCMP Staff Sgt. Dan Seibel confirms a marijuana grow-op was discovered in the trailer. Police maintained security at the site until a search warrant was executed. They seized 120 plants and some bags of bud.

“We’re looking at charges against the individuals responsible,” Seibel says. “That we have to sort out between the owner and the renter.”

Electrical inspectors, insurance adjusters, and fire investigators were all on scene today. FortisBC had only reconnected power to the trailer on Tuesday. Previously a generator was being used by the tenant.