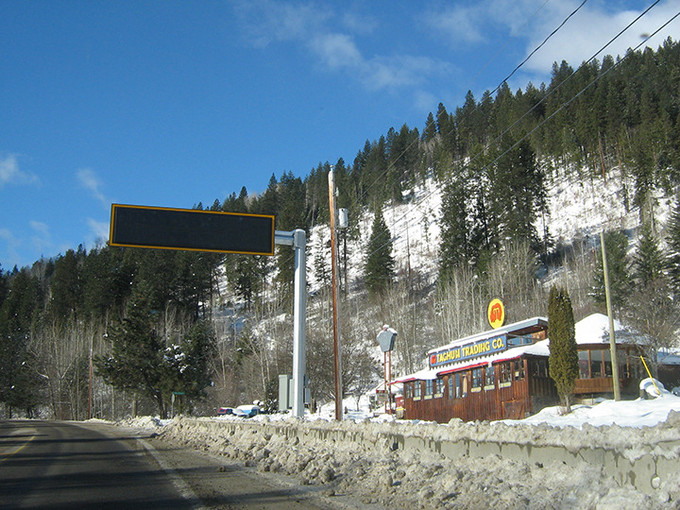 “Since about mid-December we’ve been working on the hardware and software to make sure everything’s talking to each other,” he says.

When the technology detects ice crystals forming on the pavement, it automatically posts the message “Slippery sections, use caution.”

“The sign only goes on when there are [slippery sections],” Eberle says. “Hopefully you’re looking at a blank sign most of time.”

He says they will watch the calibration and sensor system this winter, which also collects data. While the system is automated, it can be overridden manually, and other road-related messages posted.

The signs are the first of their kind in West Kootenay, and one of three sets in the province: the others are on Highway 4 at Kennedy Lake, near Tofino, and on the Trans-Canada Highway just west of Golden.

Eberle says they cost about $200,000 — money that was earmarked in the ministry’s budget to be spent on such signs somewhere in the province, so the local office applied to bring them here.

“When we did the new passing lane near Nelson, a lot of people commented on the Beasley bluffs,” Eberle says. “A number of incidents occur there every winter. We know there’s a bit of a microclimate that adds up to make the road surface conditions different than around adjacent corridors.”

Normal signage hasn’t been successful in getting people to slow down on that stretch, he says. The other alternative, of straightening the highway through that section, would be a multi-million dollar project.

“This is the next step in trying to bring awareness and change driving behaviour,” Eberle says. “We’re hoping this will be successful in eliminating incidents.”

One sign is at the east end of the bluffs at Taghum and the other on the west end near the Beasley fire hall.