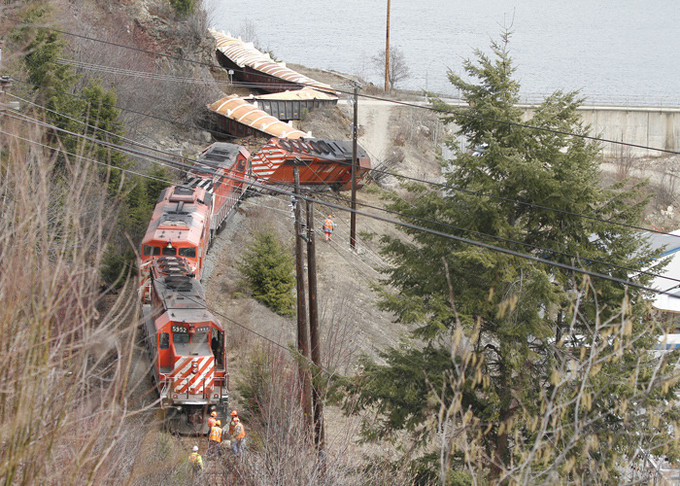 Train derailment at Corra Linn
Nelson Star - For the second time in under a week, a CP Rail train has derailed near Nelson.

Four locomotives and eight cars from a westbound 67-car train went off the tracks shortly before 10 a.m. today at Corra Linn.

CP spokesman Ed Greenberg says some cars were loaded with zinc concentrate and others were empty.

The engines and cars all remained upright. None spilled or leaked their contents and no one was injured.

It’s unclear what caused the derailment. The line remains closed.

“The cause will be investigated as soon as we have an assessment of the site and are able to get crews in to begin the necessary clean-up,” Greenberg says.

FortisBC spokeswoman Kirsten Walker says their employees at the Corra Linn dam were evacuated to a muster area on the property.

“All of our employees are safe, and there is no damage to the property,” she said. “We are monitoring the main road to our facility to keep everyone a safe distance from the derailment.”

Last Friday, a rock slide struck a train on the south shore of Kootenay Lake, derailing a locomotive, knocking a flat car down an embankment, and an excavator into the lake.