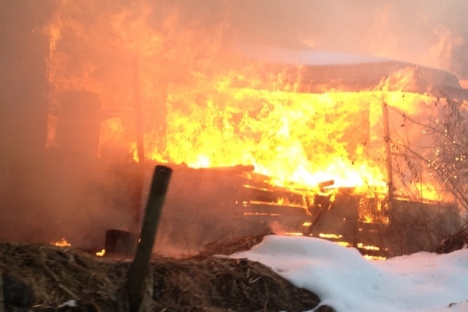 The house sitter had just cleaned out the wood stove of ash and placed the waste product on the house porch before heading back into the single resident dwelling.

After a short time the sitter noticed fire had started and quickly escaped to safety with only a blanket to keep warm.

Drivers on Bedford Road called 9-1-1 to report the fire.

Firefighters from Blewett and Beasley volunteer departments responded to the scene.

Two engines and three water tenders along with 17 firefighters attended the scene.

The wood structure was completely engulfed when fire crews arrived.

No one was injured.

This is the second fire in less than a month in the Blewett area.

Late January, a Blewett family was left homeless after fire destroyed much of the Cazakoff Road home.

No one was hurt in the mid-afternoon blaze that is believed to have started in an electrical outlet in one of the children’s bedrooms.

However, one of the families’ small dogs, named Ginger, was lost in the fire.

The Bill Lusted family, which recues dogs from Mexican shelters, had several animals inside the house.

Tammy managed to save most of the animals