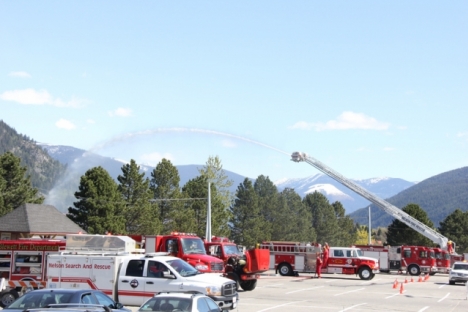 Fire Departments join forces at Inter-Agency Interface Cooperation Exercise training
The Nelson Daily - Some of the public may have thought there was a fire incident Saturday morning at the Chahko Mika Mall.

However, the incident was a “mock exercise” as Nelson Fire Department joined forces with the Regional District area departments in an Inter-Agency Interface Cooperation Exercise (ICE) training.

“We try to put on this exercise at least every two years to make sure there are no big changes and to assure all departments realize are on the same page,” Nelson Fire Department acting Chief Mike Daloise told The Nelson Daily during Saturday's exercise.

RDCK Fire Departments from Beasley, North Shore, Blewett and Balfour as well as Nelson Search and Rescue joined the Nelson Fire Department in an exercise that focused on how to coordinate attacking a simulated a wild fire.

Crews from the RDCK pulled water from Kootenay Lake into tanker trucks then transported the aqua to portable storage tanks to then be pumped to the Nelson Fire Department ladder pumper truck.

The Chahko Mike Mall parking lot was a beehive of activity as Fire trucks maneuvered from the west end through the lines of parked cars before dumping water into the portable storage tanks.

“(Today also) gives the public a chance to come down and see the fire equipment on display,” Daloise explained.

“The public is able to talk with the firefighters and get some information on smoke alarms, on home sprinkler systems . . . how to clean up their property to guard against wildfires.”

The Nelson Fire Department celebrates its 100th birthday next month.