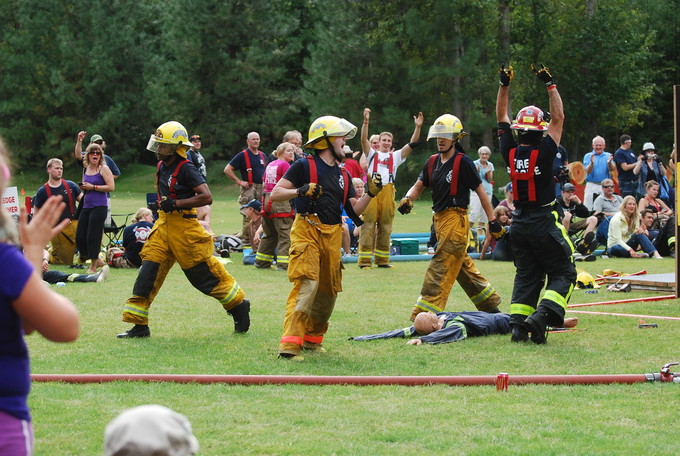 It was a fantastic weekend in Robson that started off with a bang - quite literally, courtesy of a pre-rigged motorhome that Blew Up Real Good - and ended with Beasley in second place.

Dory Craft expertly captained our team, who got off to a great start with the Randy Window Rescue challenge, the speedy Hose Roll and the Tire Hoist Challenge.   Mark did us proud in the Axe Throw, and after the Sledge Hammer relay the team moved on to the crowd pleasing Beer Barrel Battle and then the Pike Pole Javelin Throw.  Jay and Mark were outstanding in the Chin Up Bar event, managing to maintain their position as firefighters from other teams dropped off one by one.

The final event was the exciting Mayday Mayday Mahem and our boys performed a nearly flawless, blisteringly fast run through the course.  They took a running slide through wet foam, crawled through a tunnel, climbed over and through a series of walls while carrying tools, extinguished a fire, carried the long-suffering Rescue Randy up and down a flight of stairs, forced entry through a boarded-up wall and through a door, and finally dragged Rescue Randy to safety across the finish line.

Everyone had a great time.  Rebecca Scown provided rehab for the team, Al Craft and Monica Spencer cheered them on along with other members who dropped in as they were able, and Bruce MacKinnon was on the spot with his video camera.

We'd like to thank the Robson Fire Department and all of the volunteers who provided so many hours of work to make this event happen, along with the sponsors who helped raise money for Muscular Dysrophy.