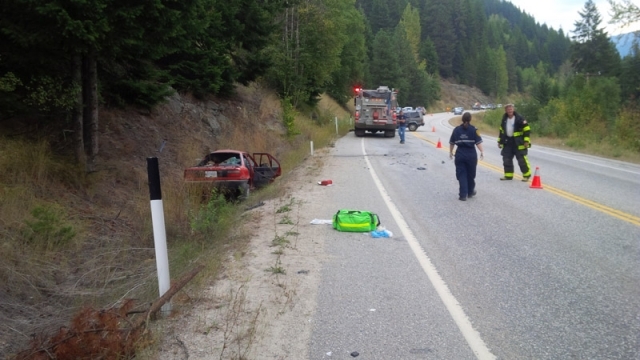 Three people were taken to hospital following a three-vehicle accident approximately 15 kilometers west of Nelson near the Beasley Fire Hall.

The accident happened at approximately 3:30 pm on the highway near the intersection of Curtis Road and Beasley Road when a Jeep Cherokee allegedly crossed the centerline before colliding with a red 1990s Toyota compact car.

The small car, carrying two females, was knocked into the ditch by the impact.

A black newer model pickup following the red Toyota was also involved in the accident.

Beasley Fire Hall staff attended the accident scene, pulling the driver of the small Toyota out of the back window of the car on a spine board.

Two females were rushed to hospital via BC Ambulance.

The male driver of the Jeep Cherokee was also taken to hospital.

The occupants of the third vehicle, a black pickup, were not hurt. However, the pickup they were driving suffered a flat tire and damage to the back quarter panel.

The RCMP investigation revealed that a 1989 Jeep Cherokee with one occupant crossed the center line and struck a 1990 Toyota with two occupants, said Cpl. John Ferguson of the West Kootenay Traffic Services in a media release.

“The driver, a 31-year-old female from the Nelson area, died from injuries suffered in the crash,” Cpl. Ferguson explained.

“Her female passenger was transported to hospital with non life threatening injuries.”

Investigation is continuing but alcohol and drugs are not believed to be factors in this crash.

The next of kin has been notified and the release of the name will be by the BC Coroners Service.

Police thank the many witnesses that have come forward and request anyone who saw the accident or prior driving of these vehicles please call the RCMP at 250-352-2156.