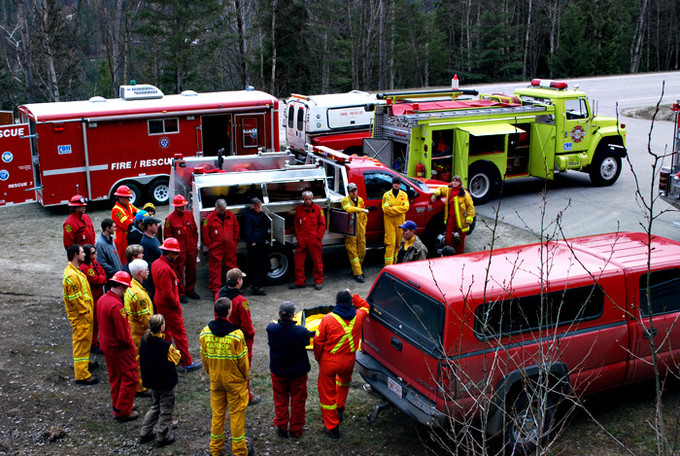 Beasley fire chief Al Craft says a total of 28 firefighters from his department plus Balfour/Harrop, Blewett, and North Shore spent a weekend learning what to do when forest flames lick at rooftops and doorsteps.

“The reality is we can’t save everything, but there are the obvious ones with metal roofs or stucco,” Craft says. “Then there are the bad ones stuck in the trees with wood siding and shake roofs that aren’t likely going to get saved. So where do we spend our time?”

Craft says the exercise included training on a sprinkler protection unit designed to protect homes, purchased with funding from the regional district and Columbia Basin Trust. The trailer is stored at the Beasley fire hall, but available to all four departments.

“The office of the fire commissioner has big units they bring in and structural protection crews that work with them,” he says. “We’re just trying to help in our little way. If a big event comes along, we can assist with equipment even if we can’t supply personnel.”

After some classroom training on the Saturday, firefighters ran a mock scenario in the Sproule Creek area the following day.

Instructor Darren Hutchinson of Quintech Fire Services Ltd. says there are big differences between a typical structure fire and an interface fire, “where we have other concerns, with a lot of people evacuating … It’s changing that mindset from just a fire truck showing up to all the hazards involved when you’re dealing with a large scale incident.”

Hutchinson says in a house fire, firefighters are mainly concerned about the burning building and the ones on either side, but “in an interface fire you have to be aware of 360 degrees.”

The course was designed to get firefighters comfortable with situational awareness, he says, and being safe, functional, and efficient with their tools.

At the same time, it was a way to meet the public: where an open house on FireSmart practices might only attract a handful of people, the drill put them in contact with over 30 residents without really trying.

“The response is interesting when they see the fire department out on a Sunday in crappy weather with their lights on practicing,” Hutchinson says, adding they seized the opportunity to pass along tips for fireproofing rural homes.

“If we can get residents to take care of some of the safety concerns for us coming onto a property, it makes it easier for more houses to be saved.”

Hutchinson adds while interface work is “daunting,” local firefighters “did a phenomenal job” putting their new-found knowledge to use.

Craft agrees the exercise went well, and says they’ll try to do it annually and involve other local fire departments.