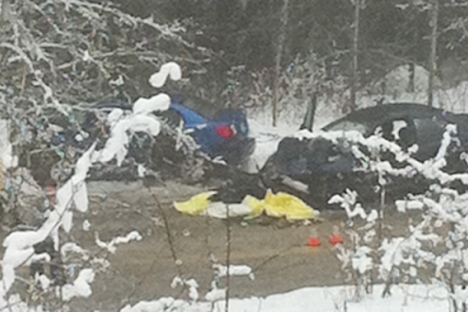 Injuries result from two car collision
The Nelson Daily - Slippery roads are believed to be the main cause of a two-car accident one kilometer west of the Beasley Fire Hall on Highway 3A Sunday afternoon.

Nelson RCMP said in a press release that a car was rounding the corner when it caught its wheels in slush on the shoulder of the road causing the vehicle to veer into the on-coming lane striking another car head on.

Fortunately the speed of the two cars was not great and injuries to both drivers was not life threatening.

A 28-year-old Nelson women suffered broken bones to her leg along with facial injuries.   The occupant of the other vehicle, a 66-year-old man from Castlegar, was also taken to hospital by ambulance to be treated for facial injuries.

Traffic had to be diverted through the old Beasley Road.

No charges have been laid at this time but police are still investigating the cause of the mishap, which happened 15 kilometers west of Nelson.